A place for artists to talk about their own work. This is a curated site for photography, painting, and video.

Laurent, who are these people you photograph?

“To be in love is to be in love with the face.” They are mainly people who evoke this feeling in me; people in my entourage or people I meet and who touch me by their singularity, for the light that they emanate, for the effort they put into living and behaving as human beings. For others, it can be also the expression of fragility, torment or distress. 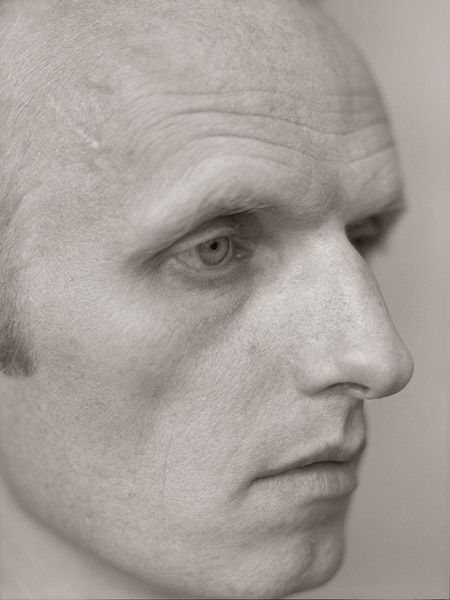 You often speak about what will disappear. Is photography like a testimony for you?

Yes, it is at the moment. By their timelessness these photographs try to reveal the precious event which is life. If I relate this to the photographed person, there is somebody there in that face, who in spite of an apparent passivity says they are unique in the world; this face bears witness to such a difference that it cannot have come about by chance. When I make my request, the first thing I say is often “this is a presentation of your face”; without expression, just look into the camera without trying to convince, seduce or express any emotions. I try to photograph that intimate part of ourselves which escapes us and with which we must learn to live. The majority of the people I photograph discover themselves during the shoot but also when I give them their picture, they don’t always recognize themselves.

In your opinion, are these photographs about what differentiates one person from another or about what makes us all alike?

I have already answered this question in part; we all have something in common but we are not all the same. We hear too much about what divides us – I am thinking about current policies, for example the repatriation of foreigners – and little of what unites us. Divisions resulting from differences are obvious and as such rather difficult to accept; we are all strangers even within our own families. It is a fortunate separation for those who are no longer afraid of the unknown. Regarding this, the desire to fuse with or to kill the other can be powerful, but if we manage to recognize our loneliness and at least to try to assume it, then art becomes a vital necessity as well as a never-ending source of curiosity and wonder.

The significance of the sacred is lost in favor of other games; nowadays it is very difficult to escape seductive or tempting images that force or attract our attention in order to impose their message instead of just offering it up to us. The human being is divided due to this particular condition resulting from the cut caused by language; they emanate a dual feeling. I use naked skin, the gaze – photography’s only resort – the silent mouth and I see different features; wild, feminine, Other, animal, body, time, absence of meaning, incomplete… there are many words, all indicating that everything is escaping us and, in the background there are shouts, waves, howls, cries and laughs; the good side is that the beauty is there in this tragedy and is to be taken seriously, just after the caesura. The other side of these open and attentive faces is calm and soothing; by looking at us silently they present the infinite and offer the best themselves.

Full face shot, neutrality of expression, you are exactly within the documentary style. It is a conscious and asserted connection?

Yes, it is now, but the approach was long and unconscious – even if I’ve always taken this aspect into account. I have far too much imagination and to not get lost I must unceasingly bring my work back to what I feel is essential. Two years ago over the summer, I worked for three months on abstraction using the chemistry of alternative processes. I photographed houses, landscapes, then people at a certain distance. Nothing substantial came of all these experiments; gradually I moved closer to the face until I got there, to its outlines. In this sense, they are more “faces” than portraits; if I move away even just a little it changes and interests me less. I realize nevertheless that for certain people three-quarter faces or even profiles are more relevant; these are other doors that I had abandoned after having brushed against them and towards which I will undoubtedly return. This does however leave the problem regarding the gaze; full face it comes smoothly into the hollow of the lens, three-quarter, it becomes a little more willful or directed or loses itself in the void.

Extract from an interview on the French website Galerie-Photo, translated and published with their kind permission.

Born in France in 1963, Laurent Lafolie has been working in photography since 1980. He has exhibited extensively in France and the United States and is represented by School Gallery Paris and Sous les étoiles Gallery in New York City.